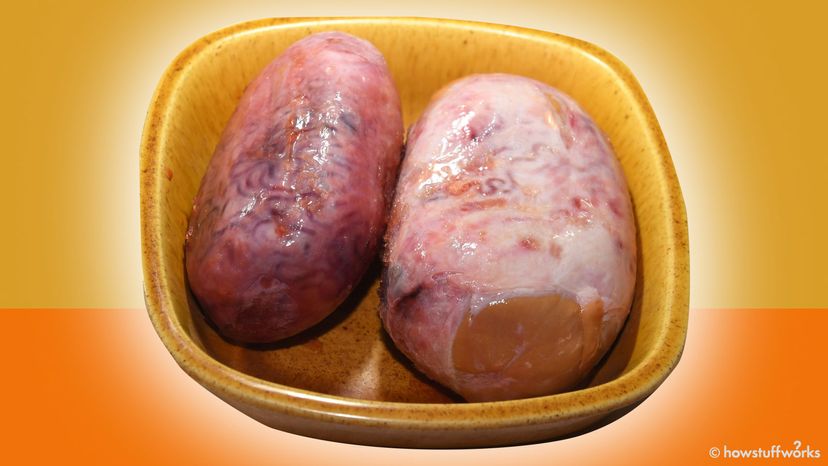 Let’s start with the most important aspect of this story – Rocky Mountain oysters are a true culinary delicacy in the western region of the U.S. They are not, however, shellfish plucked from the sea.

They’re bull testicles. Typically, they’re breaded, fried and served with a dipping sauce of your choice. And in many cases, a stiff drink to wash them down.

People really do eat them and given the number of restaurants and saloons that serve these slippery organs, they’re incredibly popular in certain towns. They even have a plethora of witty nicknames, including cowboy caviar, tendergroin, swinging beef, calf fries and, well, you get the point. No matter the moniker, the bulls aren’t laughing.

You might immediately wonder, why would anyone eat, you know, that part of a bull? Well, organ meat has a well-established place on various cultural menus throughout the world, including America. From grilled duck’s hearts to fried liver, testicles are just one more meat in the mix.

The practice also reflects a desire to avoid wasting any part of an animal that may provide sustenance. After all, it costs money to raise them, and many people find it ethically repugnant to throw away nutritious food. There are also the folks who chomp these in hopes that they’ll have an aphrodisiac effect.

It’s said that cowboys may have created this particular bit of culinary history. Each spring, they’d spend many hours castrating young bulls in the herd, for a few reasons: doing so reduces aggression and fighting, improves meat quality, and also helps to control the cattle population.

In doing so, they’d wind up with buckets and buckets (and more buckets) of slimy, raw testicles – likely the genesis for the "oyster" nicknames that are common with this delicacy. They’d throw them on a skillet or even stamp them with hot branding irons to cook them, and then scarf them down. Sometimes, they’d have so many that they’d invite the neighbors and make a party of it, where everyone had, well, a ball.

These days, so-called "testicle festivals" are common in some states. There, attendees can chow down on a bull’s nether regions while swilling beer and partying with other like-minded meat lovers.

The Testicle Festival in Clinton, Montana, was especially legendary, a party-like atmosphere with lots of alcohol, nudity, fist fights and other debauchery. It was so wild, in fact, the organizers gave up on controlling the event and canceled it for good in 2018.

The dish is especially renowned at Bruce’s Bar in Severance, Colorado. Each year, this location serves up as many as 50,000 pounds (22,680 kilograms) of the deep-fried "oysters."

In Denver, you can snarf them down at the city’s oldest restaurant, the Buckhorn Exchange. They’ve been on the menu there since 1893. They’re so popular in Denver that the Colorado Rockies serve them at the baseball stadium.

If you can get past the idea of where this particular food item originated, here’s what you’re in for. First off, unlike the old cliché, they don’t taste like chicken. "They are sort of rich, but not in the way a thick, hearty meatloaf can be. They are mostly neutral in taste, with a hint of organ-y meatiness," wrote Anna O’Brien at Modern Farmer after trying them for the first time. In a piece for NPR, KUNC (Colorado) reporter Luke Runyon described the taste as "chewy and meaty and full of a unique flavor somewhere between liver and gizzard."

Whether you’re adventurous enough to try them or just barely brave enough to read about them, Rocky Mountain oysters are here to stay. Just don’t confuse them with seafood.

They don’t taste like chicken. They taste gamey, with a hint of organ-y meatiness.

What are Rocky Mountain Oysters made out of?

What is the nutritional value of Rocky Mountain oysters?

Why do they call them Rocky Mountain oysters?

Cowboys would wind up with buckets and buckets of slimy, raw testicles – likely the genesis for the “oyster” nicknames that are common with this delicacy. They’d throw them on a skillet or even stamp them with hot branding irons to cook them, and then scarf them down.

What is another name for Rocky Mountain oysters?

How to Get More Fruit in Your Diet

The Strangest Sandwiches in the World

What Is Xanthan Gum, and Should You Stock It in Your Pantry?

It’s Not Just Black and White: An African-American Woman’s Adventures in...

Candace Stephens - July 14, 2019 0
I’m going to be completely honest with you; before I met the Danish boy that would soon become my partner, I had little

Do Finances Stress You Out? Here’s the Key to Making Sense...

35 Money Questions All Newlyweds Should Ask Each Other

There Are 6 Different Eye Shapes. Which One Is Yours?

11 Things I Wish I Could Have Told Myself When I...

Bridal Beauty Timeline: 12 Months to the Wedding Body You Want

ABOUT US
Proxxpro.com is offer useful advice to people who want to lead a more healthy life,that helps you to do exactly that — live better. if you’re looking to try new lifestyle ,this blog will certainly inspire you.
Contact us: admin@proxxpro.com
FOLLOW US
© Proxxpro.com All Rights Reserved © 2020
MORE STORIES
Food

Calories and Fat in 36 Fast Foods